Manipur presents a mosaic of traditions and cultural patterns. Particularly, it is world famous for the Manipuri style of classical dance, very much distinct from other Indian dance forms. The Manipuri school of dancing whether folk, classical or modern, is devotional in nature. The rich culture and tradition of Manipur is also depicted in its handloom clothes and handicrafts. The Manipuri handloom and handicraft are world famous for its craftsmanship as well as ingenuity, colourful, colourfulness and usefulness.

Khamba Thoibi dance is a duet of male and female partners, a dance of dedication to the sylvan deity, Thangjing of Moirang. Khamba and Thoibi are actually two mythological characters who have become immortal in Manipuri folklore. This, with the "Maibi" dance (Priestess dance) , the "Leima Jagoi" etc. form the "Laiharaoba" dance. The "Laiharaoba" dance , in many ways, is the fountainhead of the modern Manipuri dance form.This dance is a part and parcel of Moirang Lai-Haraoba. It is believed that the legendary hero - Khamba and heroine - Thoibi danced together before the Lord Thangjing, a celebrated deity of Moirang for peace and prosperity of the land.

During the festival of Lai-Haraoba which is an annual ritual festival of the Meiteis, the inhabitants of the valley of Manipur, the Maibis, the priestesses considered to be spritural mediums, trace through their dances the whole concept of cosmogony of the Meitei people and describe their way of life. Beginning with the process of creation, they show the construction of houses and various occupations of the people to sustain themselves. It is a kind of re-living of the way of life of the past. 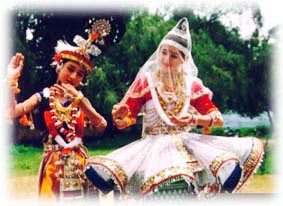 The Ras Leela, the epitome of Manipuri classical dance is inter-woven through the celestial and eternal love of Radha and Krishna as has been described in the Hindu scriptures and reveals the sublime and transcendental love of Krishna and Radha and the Gopies' devotion to the Lord. It is generally performed in an enclosure in front of the temple throughout the night and watched with a deep sense of devotion. Ras performances are seasonal and varied and performed at the temple of Shree Shree Govindajee in Imphal on the nights of Basanta Purnima, Sarada Purnima and Kartik Purnima and at local temples later. As to the composition, the performance is a combination of solo, duet and group dances. This highly stylised form of dance has sublimity, subtlety and grace. The richness of the costumes gives lustre to the beauty of the art.